Non-league finals day: All you need to know

by Pink
in British, Latest, Preview

On Sunday Wembley will play host to Macclesfield vs. York City and Cleethorpes vs. South Shields in the FA Trophy and FA Vase respectively.

Non League Finals Day will be broadcast live on BT Sport 1HD/4K from 11:30AM.

Cleethorpes could have been knocked out in the 2nd round of the FA Vase but fortunately for them two goals in the last 10 minutes salvaged them a 2-1 away win at AFC Emley.

Two successive 2-1 wins in the 3rd and 4th rounds against Bootle and Billingham Town earned them a spot in the 5th round in which again they came from behind, this time two goals down, to turnover Atherton Collieries at home.

A quarter final supplied a 7-goal thriller against Southall, the score 5-2 in favour of the Grimsby based side. This set up a semi-final against Bromsgrove Sporting with a total of 4000+ fans watching Cleethorpes win 2-1 over the two legs to reach the FA Vase Final.

Cleethorpes are currently in brilliant form, they have won their last 10 fixtures and go into this final looking for a treble alongside South Shields.

The level 9 side started their FA Vase campaign in the 2nd qualifying round with a convincing 4-0 win at Esh Winning. A 2-1 home win against Runcorn Linnets ensued as fans were treated to a Robert Briggs stoppage time winner at Mariners Park.

The Tyne and Wear club then made easy work of Marske United and Staveley M.W. in the 2nd and 3rd rounds, winning 2-0 and 3-0 respectively.

The 4th round ended in controversy as The Mariners went 4-2 down with 10 men in the 81st minute against current FA Vase holders Morpeth Town. Shortly after the 4th goal the floodlights went out and the game was abandoned by the referee.

After some harsh criticism online following the floodlights incident South Shields won the replay 4-0 in Morpeth’s back yard to progress to the 5th round in which they travelled 327 miles south to beat Team Solent 5-2.

The quarter finals were kinder to South Shields as they were awarded a home tie with Newport Pagnell, the home advantage obviously helping as they sent their opponents back down south with a 6-1 thumping.

With Wembley in sight South Shields beat Coleshill Town in the first leg 2-1 before travelling back home to secure a spot in the FA Vase final with a 4-0 win in front of 3464 spectators.

South Shields have only lost twice all season and will be looking to make their first trip to Wembley one to remember by bringing back the FA Vase.

29 goals in all competitions from Brody Robertson has skyrocketed the NCEL Prem side to the FA Vase Final and 1st place in the league this season. Robertson netted 41 times in the 2014/15 season for Cleethorpes and will be hoping to bring his shooting boots onto the big stage at Wembley this Sunday.

Unbeknown to some, former Middlesbrough midfielder Julio Arca now plays his football in Tyne and Wear. He will be the most recognisable figure on the South Shields team.

However Jon Shaw is a notable mention, the striker-turned-defender has been a rock at the back on the run in to South Shields winning the Northern League Division One; conceding 4 goals in 7 games and winning the player of the month award for April.

Former York player Scott Flinders will no doubt start in goal for Macclesfield. Flinders spent a year and a half with the Minstermen; getting relegated from League Two before being released in January this year.

Alongside Finders in the Macclesfield team are two other former York employees: John McCombe and Luke Summerfield.

For York, Yan Klukowski could make his first appearance since February, he was on the bench against Forest Green after a spell on the sidelines through injury.

Elsewhere Mills’ preferred goalkeeper Scott Loach has returned to his parent club Notts County which leaves Kyle Letheren between the sticks. Clovis Kamdjo is still out after a crucial ligament injury earlier on in the season.

The Cheshire based side began their FA Trophy campaign with a mouthwatering tie against rivals Altrincham in which they won 3-2 on aggregate following a first leg stalemate.

The second round required a trip to AFC Sudbury in which they won 3-1 which set up a 3rd round tie to now League Two side Forest Green Rovers. They defeated the playoff champions 1-0 at home to reach the quarter finals.

Dulwich Halmet are arguably one of the more famous non league sides but couldn’t edge a famous victory over Macclesfield after The Silkmen beat The Hamlet 4-2 on aggregate after a 2-2 first leg draw in East Dulwich.

Another tricky tie arose when Macclesfield drew playoff runners up Tranmere Rovers in the semi finals. Macclesfield kept their nerve, however, and managed a 2-1 victory across both legs to reach this year’s FA Trophy Final at Wembley.

The Minstermen welcomed Worcester City in the first round of the competition and sent them packing with a 3-1 home victory; only their 4th win of the season at the time.

A challenge on Harlow Town’s 3G pitch came in the 2nd round and, without the presence of top scorer Jon Parkin, York managed a 2-1 win to reach the 3rd round of the competition against Nuneaton.

Three goals in the first 20 minutes were enough to put the tie to bed as City saw the rest of the game off to win 3-0 at Liberty Way.

The quarter finals drew York City against National League North side Brackley Town who had won 4-1 in the previous round against Wealdstone. Playing at Bootham Crescent York managed to edge the visitors 1-0.

After a long season at the bottom York fans were disillusioned when they found out that National League champions Lincoln City were to be the team standing in their way of a trip to Wembley.

However, when Vadaine Oliver headed in and Aidan Connolly latched on to Morgan-Smith’s deflected shot the York City faithful left the ground with hope of a repeat at Lincoln City.

Four days later in front of 8409 fans they sealed the deal with a 1-1 draw to win the semi final 3-2 on aggregate and reach their first Wembley Final in 5 years. The last time coming when they snatched the FA Trophy and Conference Playoffs in the space of 8 days. 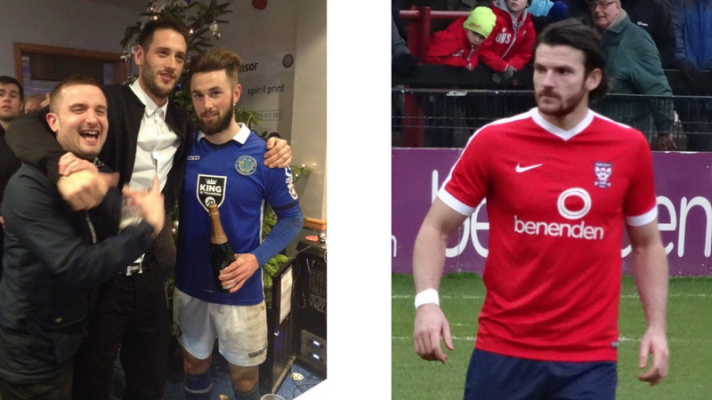 Jon Parkin and Sean Newton have been the diamonds in the dirt at Bootham Crescent this season. Both players joined on loan under Gary Mills late last year and penned permanent deals in January.

Despite City’s front three of Parkin, Oliver and Morgan-Smith scoring most of their combined 24 goals later on in the season, and Sean Newton claiming ‘Clubman of The Year’ York City were relegated on the last day when they drew 2-2 with playoff winners Forest Green Rovers.

Chris Holroyd is Macclesfield’s biggest goal threat. The ex Preston North End forward has scored scored 13 goals in the National League this season, however, has only managed 1 goal in his last 12 league appearances.

I will be at Wembley on the Sunday with BT Sport trying to look important as I cheer on my team York City in what has been a depressing season.

ALSO vote in my FA Trophy and FA Vase polls on twitter and have your say on who you think will win!

Dan can be found on Twitter @dan_simmonite and his blog is https://dansimmonite.com

Last time out I looked at the old adage that you should never attempt to go back in life....

Most of us these days have at one time or another owned a football shirt or two. Currently, kits...

When Project Restart was authorised, the ‘festival of football’ began. The Premier League carnival negotiated with its broadcasters and...

There is a saying in life that is as generally true and apt to the world of football as...

Last time out I looked at the old adage that you should never attempt to go back in life. That...

David vs Goliath: Top football matches throughout history to have seen the giant fall