But, however tenuously, these diverse events and people are indeed, linked …

Let me take you on a journey from the heat, dust and blood of that awful conflict in the Sinai desert, to a cool Sunday morning on Cold Blow Lane, just a few months later.

A time before seven days a week football (with split kick-off times).

A time before football was even played on a Sunday…

Yes dear reader, welcome specifically to the cataclysmic events of late 1973 as the petrol taps were turned off in faraway lands, leading to dramatic changes here in England.

This is, of course, a football article, but no consideration of the sporting scene of that time can truly be done without at least a nod toward the politics of the day.

Many of which remain live issues still.

Put simply, Britain was in a time of both national and international crisis.

The Conservative government of Edward Heath found itself presiding over petrol shortages, trade union unrest – and, just for good measure, a rapidly deteriorating situation in Ulster.

All of which would have taxed even the greatest of leaders, let alone Heath…

To add to the state’s funk, in late 1973 the hugely powerful National Union of Mineworkers lodged a 35% pay claim – leading directly to the infamous Three Day Working Week order.

‘This is your life!’ Screamed the ironic splash headline of the Daily Mirror on December 14th 1973.

No Eamonn Andrews here, however, as the full scale of the grim economic measures were laid out.

In the name of saving power, all workplaces and offices were to open only for three days each week, power was to be preserved for essential services only, the three TV channels were to shut down by 10:30 pm each night – oh and the government warned of ‘major unemployment’ ahead as the country seemed to lurch out of control.

Aged 13 years old, this all seemed terribly exciting, though annoyingly tempered with the banning of floodlit football matches.

I did, of course, understand that the likes of Wembley Stadium’s floodlights must have used a tremendous amount of power.

The Den’s? Hmm, much less so, as they always seemed much dimmer than other clubs.

But I could live with the economic crisis, which might as well have been a meteor impact on Mars so far as I was concerned.

But the loss of night matches seemed to me to be a deeply troubling sign of impending social breakdown, especially as Millwall had chosen this season to go on a decent League Cup run.

A competition, incidentally, in which we very rarely do well.

By the time we faced First Division Norwich City in the quarter-finals at The Den, just after the emergency regulations had been announced, these government power restrictions meant that the game had now to be played on a cool December Wednesday afternoon (I had to bunk off school to make it).

Just like the rest of the country, football was suffering from increasing economic hardship.

But tough times are also creative times; football began to think of new ways to turn things around – including playing matches on … Sundays.

It’s difficult at 46 years’ remove to get across just how exotic an idea this was back then.

Nothing happened on Sundays back then; the Observance Act of 1780 (!) still held powerful sway across the country.

All supported by a group called Lord’s Day Observance Society, who seemed mad keen on enforcing an 18th-century Christian view of what was, and what was not, permissible on the ‘day of rest’ (basically, not much was).

All of which meant that Sundays as a teenager were boring beyond belief – and anything that brought a touch of Italian style Sunday glitz and glamour to proceedings was just fine and dandy by me.

Now just as in 2020, so too in 1974, you knew things must be desperate when the Football Association actually acted imaginatively in response to a situation.

So it was the stuffy FA who actually sanctioned the very first professional matches to take place on the Sabbath day in the cup.

The honour of being the very first Sunday game belongs to Cambridge United v Oldham Athletic, which took place at 11.15 am on January 6th 1974 in the FA Cup Third Round – who said having no thought for travelling fans is a modern failing of the game?

And it seemed to be a success: ‘Sunday Fun Day – cup gates treble now will the League switch?’ asked the back page Mirror headline on Monday, January 7th 1974.

The Football League, however, kept its counsel till as late as January 13th 1974.

Back then it waged an eternal power struggle with the FA – a feud that would only come to an end in the 1990s, with the rise of the Premier League.

Once the League’s blessing was given, however, as clubs champed at the bit to get in on the Sunday football bonanza.

So inside just a few days, my own beloved Lions somehow manoeuvred to be the very first League fixture to follow suit, using the old ‘Cambridge morning kick-off’ stunt – which always worked a treat.

With a bunch of other fixtures played in the afternoon, it was Millwall that claimed the honour of being the very first league fixture – something which impressed me greatly at the time.

So it was that I found my normal Saturday 3 pm kick-off routine completely upended, in favour of the strangely bleak Sabbath mornings of those long gone, pre-retail park, much-reduced traffic days.

The game itself drew quite a crowd by Millwall standards – over 15,000 attracted as much by the novelty, as the fact of a decent London derby.

Because of the intricacies of the legislation of the time, you couldn’t actually charge money for entry through the turnstiles.

So instead a sleight of hand was concocted whereby access to the ground was technically free, upon purchase of a match day programme – which coincidentally cost the same as the normal entrance fee.

Memories of the match itself at this far distance are few; and in those television limited times, there is no footage that I have ever seen.

I do vaguely remember Brian Clark being the scorer from close range, the Mirror report the next day timed the history-making goal at 11:34 am – so just a few minutes into the eventual 1-0 win for the Lions.

In characteristic Millwall fashion though, the headlines were grabbed by the club’s refusal to extend the courtesy of Sunday football to an away fixture at Oxford United the following weekend.

Millwall chairman and Old Kent Road car dealer Micky Purser claimed that he still ‘didn’t think that Sunday football was the right thing’, also pointing out the travel difficulties for fans and its unpopularity with the players.

No one likes us, we don’t care indeed.

As much as Purser’s words might have had a hollow ring in the afterglow of a near double gate, it’s hard not to see a slight echo of more innocent times in his words.

But things had changed, whatever Purser’s reservations, whatever grumbles the Lord’s Day Observance Society had and whatever the rarely shown religious thoughts of the Millwall match day programme.

It’s editorial column rhetorically asked ‘what percentage of the population actually observe the edicts of the Sabbath?’

Whatever all the objections, playing on a Sunday was here to stay and has never gone away.

Though after a few weeks, the novelty value wore off and gates resumed largely back at their regular Saturday levels.

In February 1974 Edward Heath asked the country to vote in a General Election around the question of whom ruled the country?’ The government? Or the unions?

The answer delivered by the public was ‘not you mate’ and the Tories lost power to a minority Labour administration, though the true answer to the question was probably ‘whoever controls the petrol and electricity’.

Forty years on, with Sunday football as established as going to church once was, the answer to the Millwall programme notes’ question about how many observe the edicts of the Sabbath can be found around 11:30 am at any supermarket or shopping mall across the country. 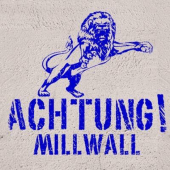 Sibling Rivalry, part 10: The Ferdinands – solid as a rock

Games of our lives – Celtic vs. Partizan Belgrade, September 27th 1989