Gothenburg ’83: How should we frame the glory years?

Has your club had them? Those heady days of success and silverware; remember when the rest of the world sat up and took notice? The ‘glory years’ can be a cursed label. We tend to only name eras once they’ve passed or, worse still, seem unlikely to return.

For fans of such clubs, direct comparisons between now and then can be deflating. Is there a way to reframe the ‘glory years’?

I began following Aberdeen, or the ‘Dons’, named after the river that flows into the city, in the early noughties. I chose my time well. This was an era in which the club finished bottom of the Scottish Premier League table and, by some quirk of the league’s stadium criteria, narrowly avoided relegation.

When my parents reminisce about Aberdeen during that great 1982-83 season, it feels like a different world altogether.

It all began with the arrival of a young manager. Sir Alex Ferguson joined in 1978 and his impact was almost instant. The Old Firm had snapped up every league between the 1965-66 and 1978-79 seasons (sound familiar?), yet, in 1980, the title was clinched by Aberdeen. It was the club’s first league title in twenty-five years.

Momentum thereafter began to roll: the Dons finished second behind Celtic in the 1980-81 season and again the following year by a mere two points, topped off by a convincing win over Rangers in the 1982 Scottish Cup.

And then came that magical European run. Aberdeen qualified for the Cup Winners Cup and quickly progressed to the quarter-finals. There, waiting for them, was Bayern Munich. Against all the odds, and despite going behind twice on the night, the Dons scored two goals in one minute to emerge 3-2 winners in the home leg. It was, and still is, considered ‘Pittodrie’s Greatest Night’. They went on to defeat Waterschei in the semis and set up a final with Real Madrid.

Fast forward to 11th May 1983. On a rainy evening at the Ullevi Stadium in Gothenburg, the unthinkable happened. Aberdeen 2, Real Madrid 1. Spanish giants felled by goals from two young Scots boys.

Then it was on to the Super Cup and the ultimate decider: a contest between the winners of Europe’s two main competitions to crown one overriding champion. Aberdeen faced Hamburg. After a goalless first leg, the decider was held at Pittodrie. The Dons rode to a 2-0 win in front of a home crowd and clinched their second international trophy in just six months.

A decade previous, the production of North-Sea oil had put the city of Aberdeen on the map. Now, with the highest accolades in Europe to their name, the football club had done likewise. Aberdeen remains the only Scottish club to this day with two European titles.

Ferguson left in 1986, but the Dons’ run of good form continued until the mid-nineties. Aberdeen thereafter plummeted from second place in the 1993-94 league to penultimate spot the following year, narrowly escaping relegation for the first time in their history through the play-offs.

The new millennium brought an almighty dip in form. On the whole, Aberdeen’s trajectory has improved steadily since: under current manager, Derek McInnes, 2014 saw the club lift their first silverware in 19 years. Six years on, however, the Dons are yet to add to the trophy cabinet. Celtic, meanwhile, stormed to a third consecutive domestic treble in 2019 (adding to this a ninth Premiership title after the recent suspension of the 19/20 season due to coronavirus). Rangers are gradually regaining pace after administration woes, and have now finished second place two years in a row by comfortable margins. Central-Belt dominance has returned.

Aberdeen’s past successes took place in a very different context to today. In Scottish football and, indeed across the globe, clubs’ on-pitch form is tied more closely than ever to their bank balances.

The gulf between sides is vast. A recent Deloitte study revealed that the Old Firm rank in the top 120 of most prosperous clubs worldwide in 2019. Celtic boasted an annual revenue of £83.4 million, whilst Rangers took in £53.2 million. Aberdeen’s income was £15.1 million. (Incidentally, both Bayern Munich and Real Madrid enjoyed revenues of at least 750 million euros). Aberdeen’s finances put them at a disadvantage in Scottish, let alone European football.

As such, the Dons could never expect to retain a squad like that of the 1980s. Many of the ‘Gothenburg Greats’ were top-class players: internationalists who had featured in the 1982 World Cup and a number who were later signed by teams in the top flight of the English league. Some talented names never left. Johnny Hewitt, the local lad who scored the winner against Real Madrid, even waived aside the chance to play at Old Trafford. Aberdeen was not a club to be parted with lightly.

Today, the pull of the bigger clubs is irresistible; Aberdeen simply cannot offer the career opportunities or resources that many other clubs provide. The Dons have benefited from developments in their youth system, yet even these lads are targets for eagle-eyed scouts. Local boys Ryan Fraser and Jack Grimmer were not even in their twenties (and had made very few appearances for the club) before they departed down south; Fraser to Bournemouth, Grimmer to Fulham. Aberdeen are now not guaranteed to enjoy the fruits of homegrown talent.

Clubs like Aberdeen face an uphill struggle to compete. But then, the Dons have long enjoyed casting themselves as the underdog. Ferguson made the most of this image whilst in charge; riling up his players before Old Firm encounters and claiming that the rest of the country expected nothing of them. It often worked. Too well, sometimes (look up the red card statistics for the team at this time!).

In 1983, the depiction of Aberdeen as a provincial club was used again by Ferguson on the eve of the European final. Under the advice of the late Jock Stein, he met the manager of Real Madrid, Alfredo di Stefano, and presented him with a bottle of whisky.  “Let him feel important,” Stein had told Ferguson. “As if you are thrilled just to be in the final.”

For many clubs who, like Aberdeen, struggle to emulate past trophy hauls, the ‘glory years’ are built on a narrative of defying the odds. They were teams who, although themselves buoyed up with self-confidence and belief, were regarded as punching well above their weight. The modern Dons squad retain the same goals as their predecessors. The aim has always been to push the big-names as far as they can. Today, the club must deploy all their creativity, grit and determination to find ways of writing their own success stories. Strategy is key.

To their credit, the Aberdeen board are a proactive bunch. Chairman Dave Cormack recently secured an innovative new partnership with MLS side Atlanta FC. His hope is that Aberdeen will be able to lean into Atlanta’s scouting network in South America, and that the link will open up future sponsorship opportunities for the Dons.

It’s a long term approach. Yet relentless underdogs do occasionally rattle the favourites. And when it happens, boy does it feel good.

The 2014 Scottish League Cup victory was a case in point. Aberdeen surprised everyone by knocking out Celtic in the eighth round, and this alone made it a modern-day success story for the club. When the final came it was somewhat underwhelming; a goalless stalemate against Inverness Caledonian Thistle that was settled only by penalties. But we didn’t care.

Nor did captain and Aberdonian, Russell Anderson. He climbed the podium and raised the trophy in a manner instantly recognisable to Dons fans: arms aloft with the cup held in one hand. It mirrored the exact pose made by former captain Willie Miller on 11th May 1983.

There was no shame in identifying the League Cup win alongside that of Gothenburg. This trophy was no European accolade, but Anderson modelled how clubs like Aberdeen can embrace their rich heritages: invoking the achievements of the past to mark the comparatively smaller, yet symbolically equal, wins of today. Dons supporters celebrated with abandon. The story of a small-moneyed, small-city club taking on the establishment still fits.

This need not be Real Madrid. We need a new barometer for measuring our clubs’ achievements in this era.

Following a team has always been a personalised experience. Something of the excitement, camaraderie and pride of the Gothenburg generation are felt by today’s fans in their own ways.

The ‘glory years’, after all, belong in the hearts and minds of supporters, not a specific moment in time.

So, fans of clubs with rich pasts, what should we do? Let’s not despair. Those heady days of titles and trophies should be celebrated, and their different socioeconomic contexts acknowledged. Our biggest rival today is structural. Success looks different, but it feels just as good. The glory years need never end. 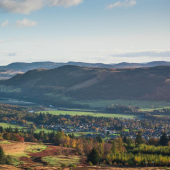 Get with the programme – Bristol City

Decades of Dislike: The First Battle of Old Trafford in October 1990

Sunderland and Allardyce – a match made in mediocrity

The unspoken genius of Tostão