Classic shirt brands: What happened to them?

When you think of shirt brands, you think of Nike, Adidas and Puma. In the 2018 FIFA World Cup, Adidas made twelve of the shirts, Nike ten and Puma four. But what about the smaller brands that disappeared? What about the crazy sashes and weird patterns and massive, large collars? The templates that Nike especially have produced over the past few years have been bland. Here are six classic shirt brands that have faded into obscurity.

Reebok started life out as J.W. Foster and Sons above a sweet shop in Bolton in 1895. 63 years later, two of the founder’s grandsons formed Reebok as a companion company. After succeeding in the athletics and the running market by creating running pumps and the use of spikes, Reebok went into football in the 1990s.

The TechTan boot signalled the start of an era that would take Reebok into a powerhouse in the football market. Sponsorship deals were signed with big names such as Andy Cole, Peter Schmeichel and Ryan Giggs. Russia then became the first team to wear Reebok in World Cup history in 1994, and by the turn of the 21st Century, Liverpool, Manchester City and Bolton Wanderers had all signed a contract to make their shirts.

Reebok had also signed a sponsorship with Bolton for the naming rights for the Trotters’ new £25 million, 28,723 all-seater stadium, The Reebok Stadium, which opened in 1997.

However, Reebok were bought out by Adidas in 2006 and after they shifted more towards the Crossfit market, we slowly started to see less Reebok football shirts. CSKA Moscow were the last team to wear Reebok in the 2010/11 season and three years later, the naming rights for the Reebok Stadium were sold to Macron.

Even Ryan Giggs’ partnership came to an end with Reebok after wearing their boots for all of his playing career in 2014 after he swapped to Nike.

Diadora was established in post-war Italy in 1948 after the Veneto region made military shoes for the Italian army. The experience gained from the war led Marcello Danieli to found the company to make mountain boots. By the mid-1970s, Diadora went into football after succeeding in the ski-boots and tennis market. Juventus forward, Roberto Bettega became the first big football name to wear the brand.

The following decade saw more big names joining Diadora. Marco Van Basten became the face of the brand with his own boots being launched, San Siro Van Basten. Zico and Marco Tardelli also joined the brand and by 1984, Diadora had become the face of the Azzurri. Making Italy’s shirts for three World Cup’s and two Euros’.

More contracts followed suit. By the mid-1990s, Greece, Scotland and Belgium all joined Italy in having their national team shirts made by Diadora and by the early 2000s, large club sides had also made the switch; Roma, Napoli, Fiorentina, Aston Villa and Rangers all signed contracts with the Italian brand.

This would be the peak for Diadora however as in 2009, they entered administration. Geox bought the company and the football arm of the business has seemed to have suffered, with Diadora only now having one major contract, with Vasco Da Gama in Brazil.

Admiral rose to prominence after managing to negotiate a contract with Don Revie to make Leeds United’s shirt for the 1973/74 season, becoming the first team to wear a shirt with a visible brand on. Realising the commercial potential for replica sales, the FA soon joined Leeds, and Admiral made England’s national team shirts for eight years between 1974 and 82’.

The 1976 FA Cup final saw Southampton and Manchester United both wear Admiral, with more clubs noticing the potential of having a shirt made for fans to buy. More English clubs such as Tottenham Hotspur, Southampton and West Ham had joined the lineup alongside Red Star Belgrade and Eintracht Frankfurt.

Admiral became a cult hero in football shirts with their classy and 70’s swoosh designs. The large collars, bright colours and strange colour combinations (see Coventry City’s brown away kit from 1978) made them pioneers in the market we know today for football shirts.

Unfortunately, the experimental and sometimes mad designs weren’t enough for Admiral to compete with new players on the market, Adidas and Umbro in the 1980’s. Once the England contract had been sold to Umbro after España 82, Admiral started to slowly decline.

Bankruptcy in the same year didn’t help things, and despite the company starting up again two years later and getting some good contracts with Football League clubs, the force that Admiral was in the 1970s would never return. In 2020, Admiral still exists but only makes shirts for Shrewsbury Town, a few CONCACAF national teams and two club teams in Malaysia. A long drop from where they were 40 years ago.

After retiring from football after playing for the likes of Vicenza and Pescara, Nicola Raccuglia founded an iconic brand that would define Italian football in the 1980s. The shirts were a thing of beauty. A far cry from today’s polyester-made, tight-fitting garments, Ennere went for a mixture of cotton and wool with hand-sewn numbers. The results were incredible.

Those Napoli, Roma, AC Milan and Lazio shirts that Ennere designed are timeless. Simple but classy, with large collars and the Ennere initials sewn into the top left-hand corner.

Ennere became part of the fabric of Italian football at a time when iconic players such as Diego Maradona, Roberto Mancini and Franco Baresi were all wearing the brand when Serie A was filled with talent.

Unfortunately for Ennere, the brand value started to wear off when Raccuglia left the company in 1985. After his departure the quality of the shirts began to decline, and with competition fierce from abroad and among the continent, Ennere ditched the cotton for polyester. The brand was never the same again and hasn’t made a shirt for a team since 2011, when they made shirts for J.League side Tokyo Verdy.

Gola may not have reached the heights of any of the other brands in this list but it was still worn by some big names in the 1970’s. Peter Shilton, Bill Shankly, Alan Hudson and Alf Ramsey all wore the brand which led to boots such as the Goalmaster and Wembley becoming popular within the UK. The brand also gained cult status after Melchester Rovers wore Gola in the Roy of the Rovers comic.

The National League was also known as the Gola League for the first few years of its existence between 1984-86 but that was the last time Gola was involved with football. Gola’s fate is a similar one to Admiral, as it became impossible for them to compete with the likes of Adidas and Nike for sponsorship. Gola did have some money but not the cash reserves to compete with the giants of the industry.

Warrior are best known for that horrific Liverpool third shirt that was worn during the 2012/13 season that was purple with an orange collar and a really weird pattern on the sleeves. Warrior were allowed to do this as they had paid £25 million a season to have the privilege of embarrassing Liverpool by ruining their shirts.

Originally a lacrosse and ice hockey brand, Warrior entered football in 2012 and signed contracts with the likes of Porto, Stoke City and Sevilla alongside Liverpool.

New Balance bought the company in 2004 and presumably after they saw Warrior had employed a six-year-old child to design their shirts and were naming features on their shirts “gloryholes” and “murderholes”, they took charge of Warrior’s football business and the brand was slowly phased out and renamed as New Balance Football at the beginning of the 2015/16 season.

Warrior still do exist in Hockey and Lacrosse but haven’t been trusted by New Balance to create football shirts after their strange patterns and crazy designs. 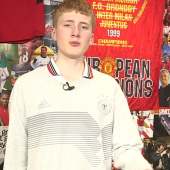 Gunter Netzer: The uncanny and the awe-inspiring